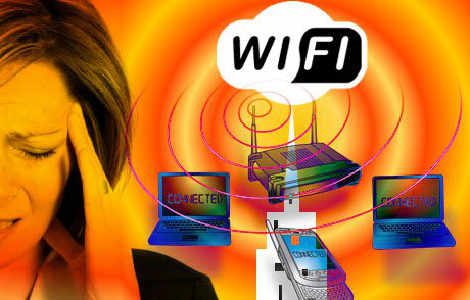 My mother had a favorite saying that rhymed: “All you need from dawn to dawn is someone else to blame it on.” WiFi involves mysterious emissions that you can’t see and that sneakily permeate our environment, and they have become a popular target for blame.

A lawsuit has been filed against the Fay School in Massachusetts on behalf of a 12-year-old boy designated as “G,” alleging that the school violated his rights under the Americans with Disabilities Act and failed to use ordinary care for his safety. They allege the school was negligent in failing to make accommodations to protect the boy from extremely high levels of radiofrequency/microwave radiations. He allegedly suffers from Electromagnetic Hypersensitivity Syndrome (EHS). The family is seeking $250,000 in damages.

After the school upgraded its Wi-Fi system in 2013, G began to have headaches, itchy skin, rashes, nosebleeds, dizziness, chest pains, and nausea. He frequently went to the school nurse and had to leave school early. His symptoms would usually resolve after he had been home for several hours, and he did not experience “the intense symptoms” on weekends and holidays.

One day when G’s mother picked him up from school, she discussed his symptoms with the school nurse, who indicated that various children in G’s classes had also reported similar symptoms. This led the mother to do “much research and study” which eventually convinced her that her child was suffering from EHS.

After learning of EHS, the parents took G to a doctor who was recommended to them by “environmental health specialists.” Jeanne Hubbuch, MD, determined that G’s symptoms were caused by exposure to the school’s Wi-Fi system.

The school engaged the services of an independent company, Isotrope, LLC, that specializes in measurement and analysis of radio communication signals and evaluation of emissions safety compliance. It was one of the firms recommended as an expert source by the parents who raised the concern. It reported that

levels of Access Point emissions, inside the School and on the grounds, were substantially less than one ten-thousandth (1/10,000th) of the applicable safety limits (federal and state).

The science cited in the lawsuit

The lawsuit claims that the diagnosis of EHS is supported by compelling science showing that when sensitive people are exposed to electromagnetic fields (EMF), it causes a higher risk of developing headaches, increases in heart rate, arrhythmias, changes in blood pressure, dizziness, and sleep deprivation. It shows that EMF “can change neurotransmitter functions, blood-brain barrier, morphology, electrophysiology, cellular metabolism, calcium efflux, and gene and protein expression in certain types of cells even at lower intensities.” That is not an accurate representation of the body of scientific evidence.

There is an excellent overview of the subject on the Quackwatch website that summarizes the findings of the World Health Organization and other organizations. Briefly, the symptoms that “EMS” patients report are real, but there is no evidence that they are caused by EMF exposure. In provocation studies, patients were unable to tell when they were being exposed to radiofrequency emissions, and they reported the same symptoms regardless of whether the devices were turned on or off. Steven Novella has written about it. Bad Science Watch has issued a position paper that reviews the science and concludes that the evidence “robustly” dispels the connection between WiFi and symptoms of “electromagnetic hypersensitivity.”

In one amusing development, protestors demanding the removal of a tower were informed that the tower had been switched off during the period when they claimed it was causing symptoms.

Dr. Jeanne Hubbuch is board-certified in both family practice and in environmental medicine. Her website raises a number of red flags. She advocates functional medicine, biologic medicine, chelation, orthomolecular medicine, intestinal balancing, sauna, IV nutrients, complex homeopathy, supplements and enzymes, connection of illness to dental amalgams and root canals, high-dose vitamin C, alkaline IVs and an alkaline diet, and immune support for cancer patients with high-dose vitamin C, iscadore/mistletoe, curcumin, bitter melon, and pectasol C. She uses Heart Rate Variability testing and live cell analysis, promises to remove toxins and blockages, and claims that she deals with the underlying causes of illness instead of symptoms. These are all questionable practices ranging from the inadequately tested to the bogus and disproven. I won’t go into detail here, but most of them have been critiqued on this website, on Quackwatch, and in the Skeptic’s Dictionary. She doesn’t accept insurance or Medicare; if she did, I suspect they would refuse to reimburse for much of what she offers.

Hubbuch is a member of the American Academy of Environmental Medicine (AAEM) and the International Lyme and Associated Diseases Society (ILADS). The AAEM is a questionable organization that is not recognized by the American Board of Medical Specialties. I have written about the problems with that organization before. One of its major proponents is the infamous Dr. William Rea, who was featured on a Nightline exposé and who has repeatedly faced charges from his state medical board. He is not alone: Quackwatch has a page dedicated to the regulatory actions against AAEM members.

In a 2012 case in New Mexico, the court excluded the testimony of “experts” who claimed a scientific basis for EMF sensitivity on the grounds that their evidence was not generally accepted by the scientific community, and that “experimental and epidemiological studies have failed to provide clear support for a causal relationship between electromagnetic fields and complaints of EMS.” The suit was dismissed.

In the current case, both sides have asked the judge to postpone a hearing until September 25, saying an agreement may eliminate the need for that hearing. The case may be dropped (and in my opinion should be dropped), but it serves as a cautionary example. If cases like these with no scientific merit were to succeed, it would create difficulties for schools that are trying to provide a computer-age education for their students. It would encourage public misunderstanding of the issues, and would encourage quack diagnoses and treatments.

Most importantly, this lawsuit is a disservice to this child. He has symptoms that deserve to be taken seriously, rationally investigated, and treated appropriately. Jumping to the conclusion that they are caused by “electromagnetic hypersensitivity” and seeking a remedy through litigation are surely not in his best interest.