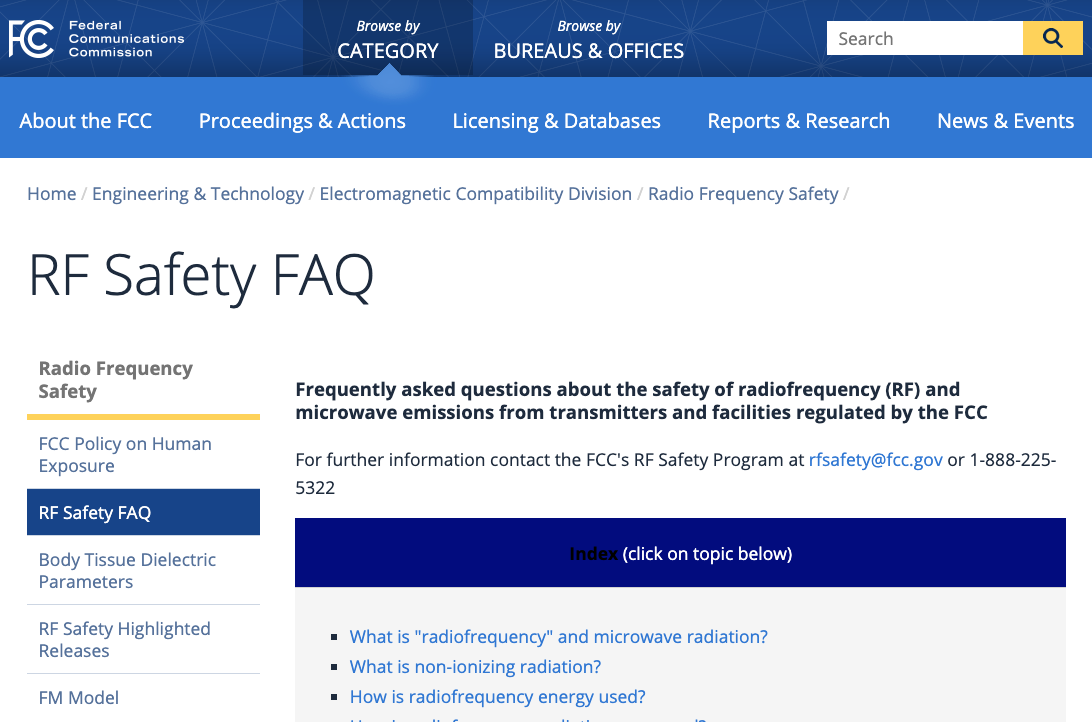 The FCC does not protect Public Health and Safety. It is the responsibility of NEPA, FDA & EPA. Below are FAQ directly from the FCC’s website. All City, County Planning department must require NEPA review on all Cell Facilities.

WHY HAS THE FCC ADOPTED GUIDELINES FOR RF EXPOSURE?

The FCC authorizes and licenses devices, transmitters and facilities that generate RF radiation.  It has jurisdiction over all transmitting services in the U.S. except those specifically operated by the Federal Government.  However, the FCC’s primary jurisdiction does not lie in the health and safety area, and it must rely on other agencies and organizations for guidance in these matters.

Under the National Environmental Policy Act of 1969 (NEPA), all Federal agencies are required to implement procedures to make environmental consideration a necessary part of an agency’s decision-making process.  Therefore, FCC approval and licensing of transmitters and facilities must be evaluated for significant impact on the environment.  Human exposure to RF radiation emitted by FCC-regulated transmitters is one of several factors that must be considered in such environmental evaluations.  In 1996, the FCC revised its guidelines for RF exposure as a result of a multi-year proceeding and as required by the Telecommunications Act of 1996.

Facilities under the jurisdiction of the FCC having a high potential for creating significant RF exposure to humans, such as radio and television broadcast stations, satellite-earth stations, experimental radio stations and certain cellular, PCS and paging facilities are required to undergo routine evaluation for compliance with RF exposure guidelines whenever an application is submitted to the FCC for construction or modification of a transmitting facility or renewal of a license.  Failure to show compliance with the FCC’s RF exposure guidelines in the application process could lead to the preparation of a formal Environmental Assessment, possible Environmental Impact Statement and eventual rejection of an application.  Technical guidelines for evaluating compliance with the FCC RF safety requirements can be found in the FCC’s OET Bulletin 65 (see “OET Safety Bulletins” listing elsewhere at this Web site).

Low-powered, intermittent, or inaccessible RF antennas and facilities (including many cell sites) are normally “categorically excluded” from the requirement of routine evaluation for RF exposure.  These exclusions are based on calculations and measurement data indicating that such transmitting stations or devices are unlikely to cause exposures in excess of the guidelines under normal conditions of use.  The FCC’s policies on RF exposure and categorical exclusion can be found in Section 1.1307(b) of the FCC’s Rules and Regulations [47 CFR 1.1307(b)].  It should be emphasized, however, that these exclusions are not exclusions from compliance, but, rather, only exclusions from routine evaluation.  Transmitters or facilities that are otherwise categorically excluded from evaluation may be required, on a case-by-case basis, to demonstrate compliance when evidence of potential non-compliance of the transmitter or facility is brought to the Commission’s attention [see 47 CFR 1.1307(c) and (d)].

WHAT RESEARCH IS BEING DONE ON RF BIOLOGICAL EFFECTS?

For many years, research into the possible biological effects of RF energy has been carried out in laboratories around the world, and such research is continuing.  Past research has resulted in a large number of peer-reviewed scientific publications on this topic.  For many years the U.S. Government has sponsored research into the biological effects of RF energy.  The majority of this work was initiated by the Department of Defense, due in part, to the extensive military interest in using RF equipment such as radar and other relatively high-powered radio transmitters for routine military operations.  In addition, some U.S. civilian federal agencies responsible for health and safety, such as the Environmental Protection Agency (EPA) and the U.S. Food and Drug Administration (FDA), have sponsored and conducted research in this area.  At the present time, other U.S. civilian federal health and safety agencies and institutions, such as the National Toxicology Program and the National Institutes of Health, have also initiated RF bioeffects research.

In 1996, the World Health Organization (WHO) established a program called the International EMF Project, which is designed to review the scientific literature concerning biological effects of electromagnetic fields, identify gaps in knowledge about such effects, recommend research needs, and work towards international resolution of health concerns over the use of RF technology.  The WHO maintains a Web site that provides extensive information on this project and about RF biological effects and research (www.who.int/peh-emf/en/).

The FDA, the EPA and other federal agencies responsible for public health and safety have worked together and in connection with the WHO to monitor developments and identify research needs related to RF biological effects.  More information about this can be obtained at the FDA Web site: FDA Radiation-Emitting Products – Current Research. (Back to Index)

CAN RADIOFREQUENCY RADIATION CAUSE CANCER?

Some studies have also examined the possibility of a link between RF exposure and cancer.  Results to date have been inconclusive.  While some experimental data have suggested a possible link between exposure and tumor formation in animals exposed under certain specific conditions, the results have not been independently replicated.  Many other studies have failed to find evidence for a link to cancer or any related condition.  The Food and Drug Administration has further information on this topic with respect to RF exposure from mobile phones at the following Web site: FDA Radiation-Emitting Products Page .