The U.S. Court of Appeals for the D.C. Circuit court ruled the Federal Communications Commission failed to provide a reasoned explanation for its determination that its current guidelines adequately protect against harmful effects of exposure to radiofrequency radiation.

Children’s Health Defense (CHD) won its historic case today against the Federal Communications Commission (FCC), a case challenging the agency’s decision not to review its 1996 health and safety guidelines regarding wireless-based technologies including 5G. 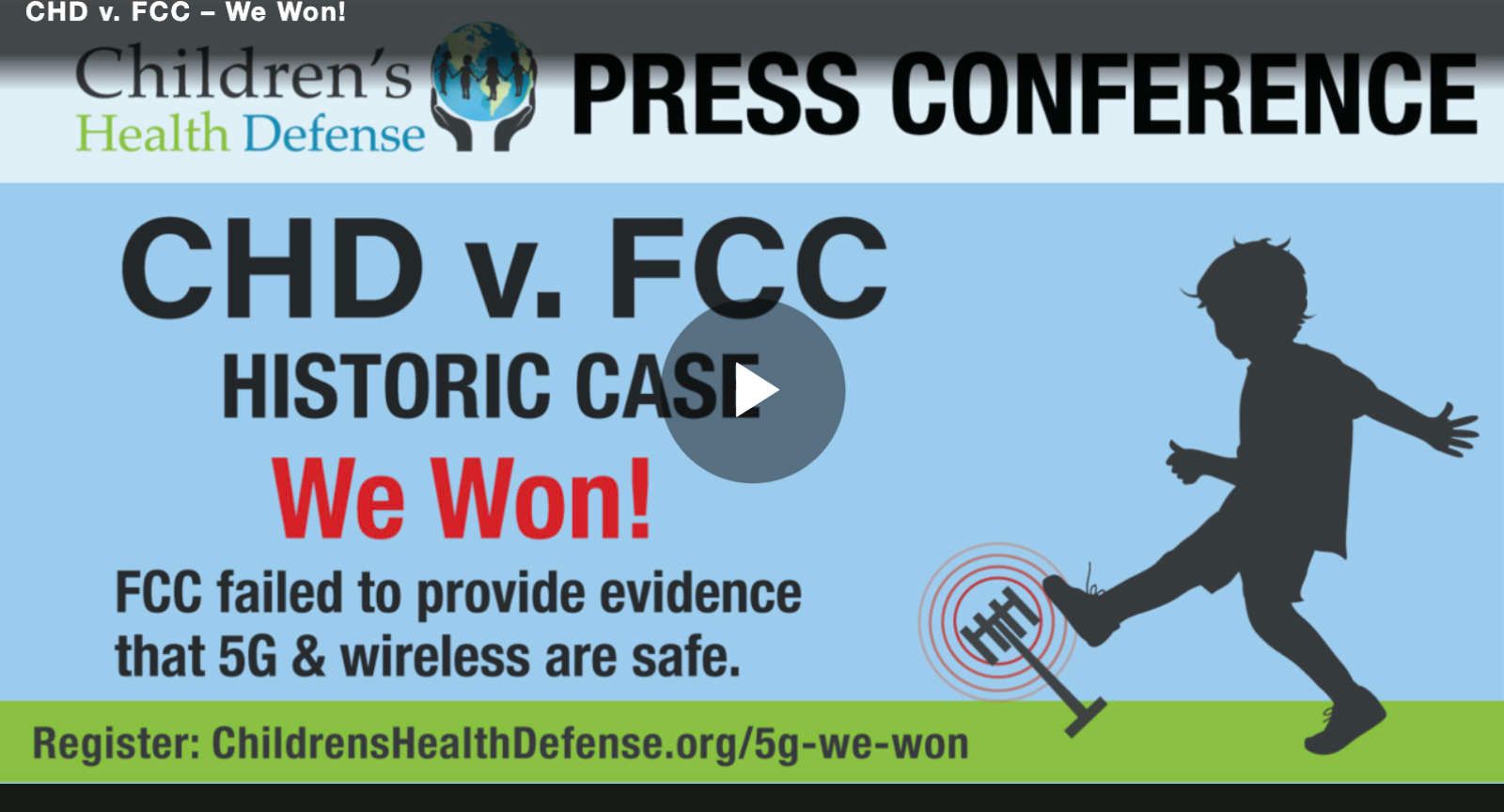 The U.S. Court of Appeals for the DC Circuit published its decision Aug.13. The court ruled that the FCC failed to consider the non-cancer evidence regarding adverse health effects of wireless technology when it decided that its 1996 radiofrequency emission guidelines protect the public’s health.

“The court’s decision exposes the FCC and FDA as captive agencies that have abandoned their duty to protect public health in favor of a single-minded crusade to increase telecom industry profits.”

CHD’s case was consolidated with another similar case that was filed by the Environmental Health Trust. The organizations filed joint briefs in the case.

CHD’s lead attorney for the case, Scott McCollough, a telecommunication and administrative law attorney who represented the petitioners in the hearing, said:

“This is an historic win. The FCC will have to re-open the proceeding and for the first time meaningfully and responsibly confront the vast amount of scientific and medical evidence showing that current guidelines do not adequately protect health and the environment.

The court’s decision continued to say:

The petitioners in the case filed 11,000 pages of evidence of harm from 5G and wireless technology which the FCC ignored, including evidence of already existing widespread sickness.

The State of New Hampshire was put into the same predicament that the City of Boise, Ada County and ACHD is facing right now. After hearing testimony of potential health risks and the political ramifications of small cell antennae being deployed on the public rights-of-way throughout New Hampshire, agreed that a Commission be formed to … Read more

COMPILED BY MIRIAM LINDBECK, EMRS “The present FCC thermal regulation, in addition to lacking any sound scientific foundation, as pointed out by Petitioners, is perpetrating a continuing, ever-expanding, and cruel injustice.” – Building Biology Institute CHD vs FCC Children’s Health Defense vs Federal Communications Commission with EHT (Environmental Health Trust) In the early Spring of 2020, … Read more

The FCC does not protect Public Health and Safety. It is the responsibility of NEPA, FDA & EPA. Below are FAQ directly from the FCC’s website. All City, County Planning department must require NEPA review on all Cell Facilities. FCC – RF Safety FAQ WHY HAS THE FCC ADOPTED GUIDELINES FOR RF EXPOSURE? The FCC … Read more

PUBLISHED JANUARY 15, 2020 Citizens for 5G Awareness A recent court ruling examined the requirement for a Federal review for the placement of 5G small cell towers under the National Environmental Policy Act (NEPA). The court overruled the Federal Communications Commission (FCC) arguments in favor of Native American tribes, giving them and all cities the right to require NEPA … Read more

The Harvard Edmund J. Safra Center for Ethics published an expose “Captured Agency”  by investigative journalist Norm Alster on the financial ties between the US federal government’s  Federal communications Commission (FCC) and how, as a result, the wireless industry has bought inordinate access to—and power over—a major US regulatory agency. Alster describes how  the FCC is a “captured … Read more


Notice: ConstantContact_API::get_disclosure_info(): The script tried to execute a method or access a property of an incomplete object. Please ensure that the class definition "Ctct\Components\Account\AccountInfo" of the object you are trying to operate on was loaded _before_ unserialize() gets called or provide an autoloader to load the class definition in /var/www/wp-content/plugins/constant-contact-forms/includes/class-api.php on line 1004